Nandor was a Smith in his past life so he has been helping a little in fixing things that need fixing. But mostly he’s been wandering the camp making sure people have been treated fairly and aren’t being mistreated by the thugs in power. Since the cataclysm he’s blamed the governments in power for the breaking the world and has been traveling to set things right for the common folk, whether legal or not. He would have taken note of someone selflessly helping the common folk and would have helped to make sure those in need made their way to the help they needed. I can imagine during these efforts he would have been made aware of Fia. Also traveling amongst the common folk who look tales and stories he would have also heard of the defeating of a terrible monster by a new camp resident Nuuti and as a dwarf who loves stories and drink would have “bought them a drink” (whatever passes for that in this camp). I can see Nandor also crossing paths with Askel because they seem to share a common goal of protecting people from tyranny (bullies) and perhaps also heard they are looking for family so he would keep his eyes and ears open as he wandered around the camp. Basically Nandor sympathizes with the common folk and is always looking out for an opportunity to help them, especially against tyranny. He’s not the most agreeable personality but feels he’s been given a calling to use his skills for the general betterment of all. He’s a grumbly miserable sort at times but will always be there for someone in need.

I think a good quote for Nandor too is (since he is seen using axes) when he was once asked why he didn’t use swords: “Ack, swords? Elegant weapons for an inelegant times boyo.”

Nandor once believed in something, but the cataclysm shredded his faith and he put his faith into the spirit of the common folk and belief in their resilience through anything and in the strength of his dwarven ancestors who he remembers in venderates via pictorial tattoos he wears on his body. Once he was a “good dwarf” and gave lip service to Geb. But those days are past. He doesn’t begrudge others their beliefs, but like Conan he lost his time for gods. Believing in the strength of those who came before and those who will come after and to leave the world better (for everyone, yeah it’s a theme). 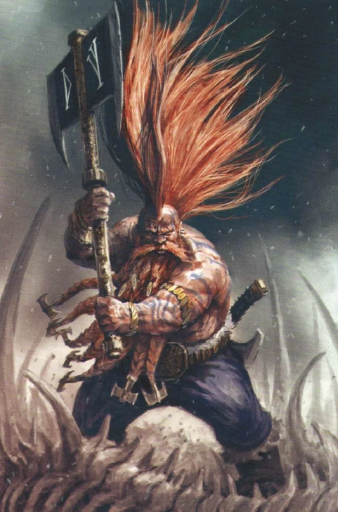